I recently built a 5x5 passive matrix mixer. A passive matrix mixer is one that contains no active components, that is, no amplifiers, buffers, or anything that uses electricity. The signals are mixed through resistors, and are attenuated by potentiometers. I also included switches so that the level can be set with the pot, then turned on and off with the flip of a switch. One thing to keep in mind about a passive mixer is that it works best if the signals are fairly hot. Line level signals will work, but will not give you much headroom in the volume department. 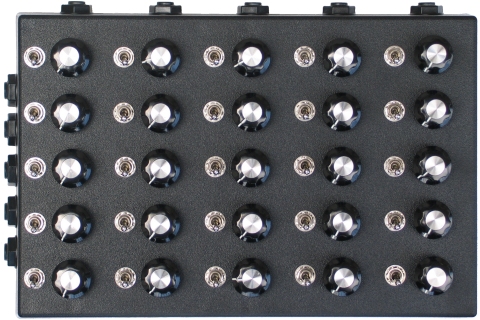 The insides are fairly simple, as you can see. Just 10 jacks, 25 pots, 25 switches, 25 resistors, and a lot of little connecting wires. The white wires are ground and the yellow are signal. I like to color code things so that I can keep track of them easier. 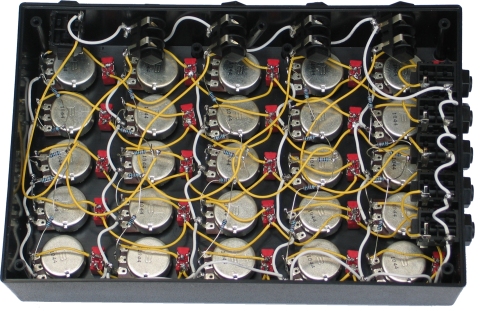 Before I build something this complex, I want to know that all the parts will fit in the enclosure. So, I make a diagram of the finished unit like the one below. I use CorelDRAW and either draw the outlines of the controls myself, like the jacks and switches, or import them from the part's datasheet, like I did here for the pots. 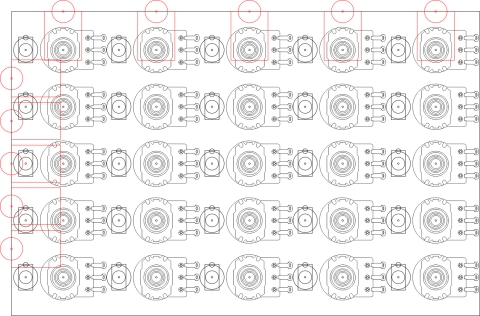 Below is the schematic diagram. It shows a 3x3 mixer. Larger configurations can be built by repeating the sections. They don't need to be symmetrical, either. You could build a 3x5, or 5x3, or 9x12, or whatever-by-whatever. The values of the pots and resistors are not critical, but they have to be all the same. I used 100K pots and 10K mixing resistors. 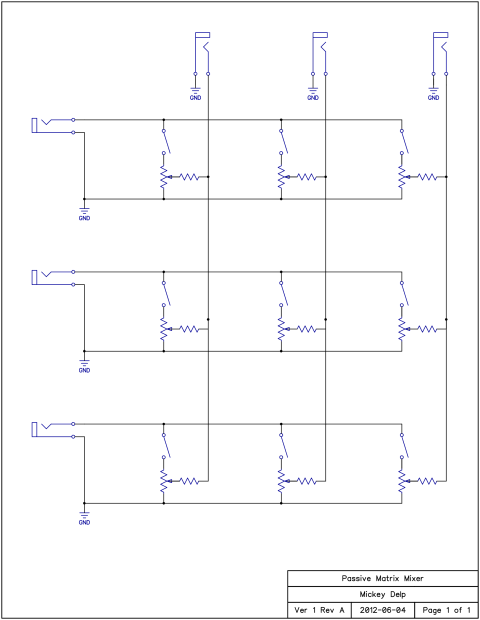 In the video below, I used two inputs and three outputs. The inputs are (1) an iPhone repeatedly playing an audio clip, and (2) Delptronics Mesmogrifier and Bender Sequencer which I have built into a clear enclosure. The outputs are (1) straight to the amplifier, (2) through a Wooster Audio Space Baby echo, and (3) through a Delptronics Ring Modulator. With that setup, I can control dry/wet/wet ration of each input.

This project was actually a commission for Stephen in Tulsa, OK. I was sorry to have to ship it off to him.
Enjoy your mixer, Stephen!

If you would like to build one, here here is a Mouser Project that has all the necessary parts. The total parts cost is about $130, including shipping. You will also need a bunch of wire to connect everything. The above parts are not the only ones that will work. There are a zillion different models of potentiometer, switches, knobs, and enclosures.

P.S. I no longer do custom passive matrix mixer builds for customers. Just too busy!