The Mystical Tarotron is an old-fashioned fortune telling machine with LEDs. The cards are aranged in the classic celtic cross layout. Each card uses a dual 14-segment "union jack" LED display.

The inspiration for the Tarotron was Alan Watts' Eye of The Pyramid. My sweetie saw it and was very impressed. I, in turn, wanted to impress my sweetie by building something in a similar style, but with my own twist. 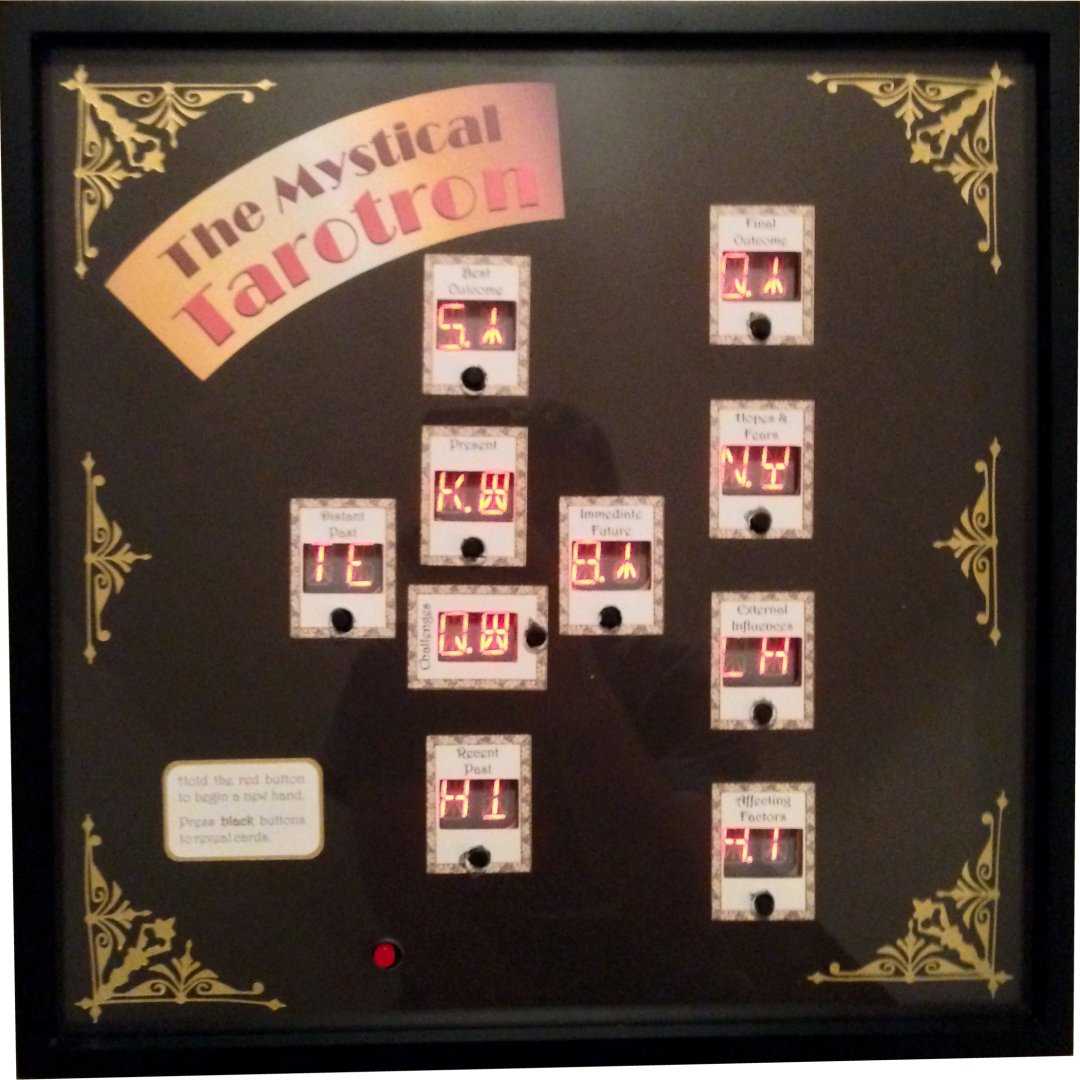 Press the red button to start a new hand. The cards are shuffled, and each of the LED displays is set to a back of card image. Press the black buttons next to the cards to flip them over. The full name of the card scrolls across the display. You can repeat the name of the card by pressing the flip button again. The Tarotron only shuffles and displays the cards. Just like with a physical deck of tarot cards, you must interpret them yourself.

The Tarotron is built on a custom PCB, which can be seen at the bottom of this page. It is housed in an off the shelf picture frame. I replaced the glass front of the frame with plexiglass and drilled holes for the buttons to stick through. The graphics are all printed on card stock and glued to the background. This gives the cards a 3D effect. The metallic flourishes are cut out of metalic card stock using a digital cutter and glued onto the background.

As you can see in the schematic, the LEDs are driven by six MAX7221 chips. Each set of four LEDs requires two driver chips. The rest of the circuit is a PIC microcontroller and 12 buttons. I brought all the unused pins of the microcontroller out to a header in case I wanted to connect something else later. That was good thing, because I did end up connecting a sound board.

When the machine powers on, it says "The Mystical Tarotron". When you shuffle, it plays the sound of shuffling cards, and each time a card is flipped over, it says the name of the card. You can repeat the name of the card by pressing the flip button again. I used an online text-to-speech converter to create the intentionally robotic sound clips. The sounds are recorded into and played back with a modified Delptronics Guitar Meister PCB. You can see the Guitar Meister daughter board hacked onto the main board in the picture below.

The back of the Tarotron 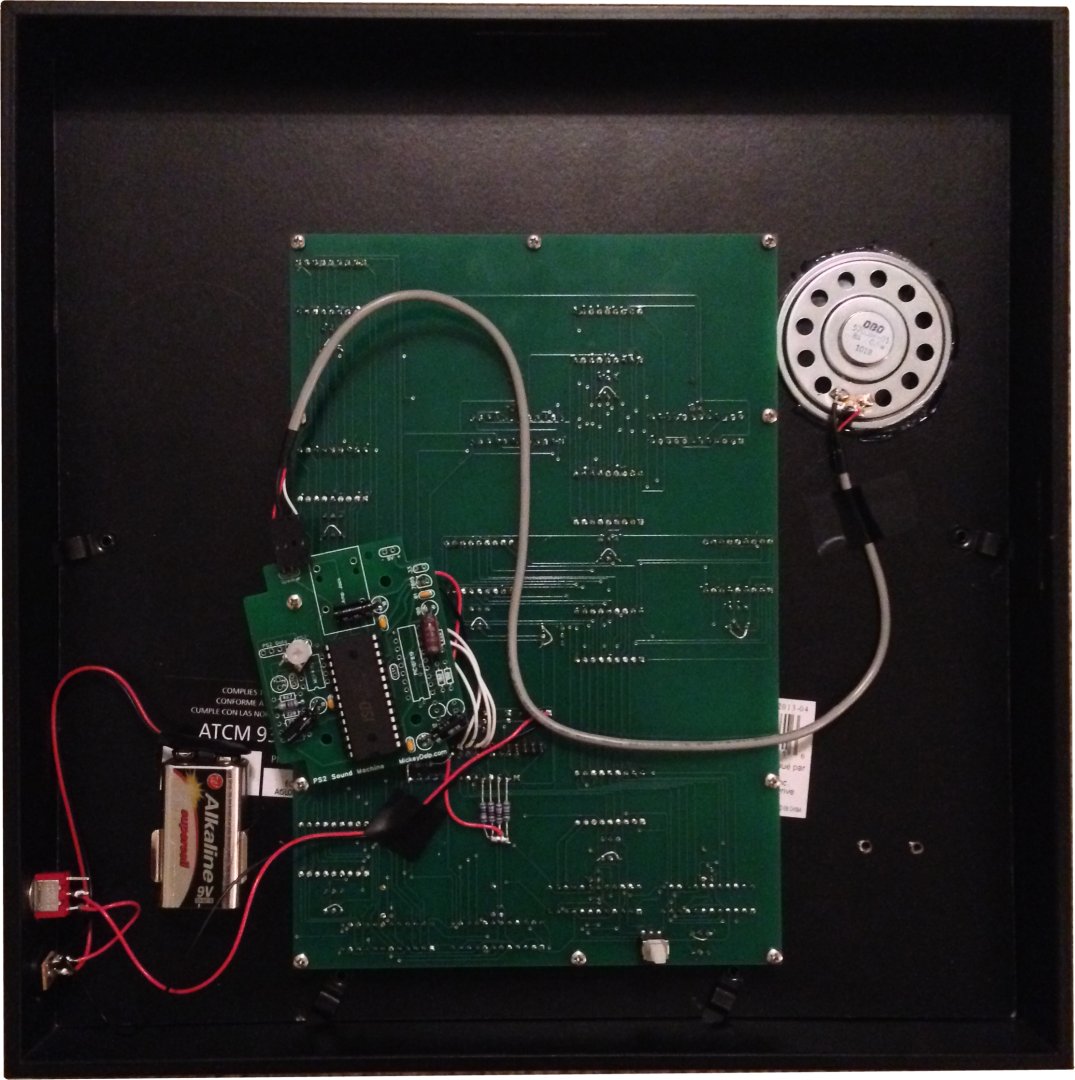 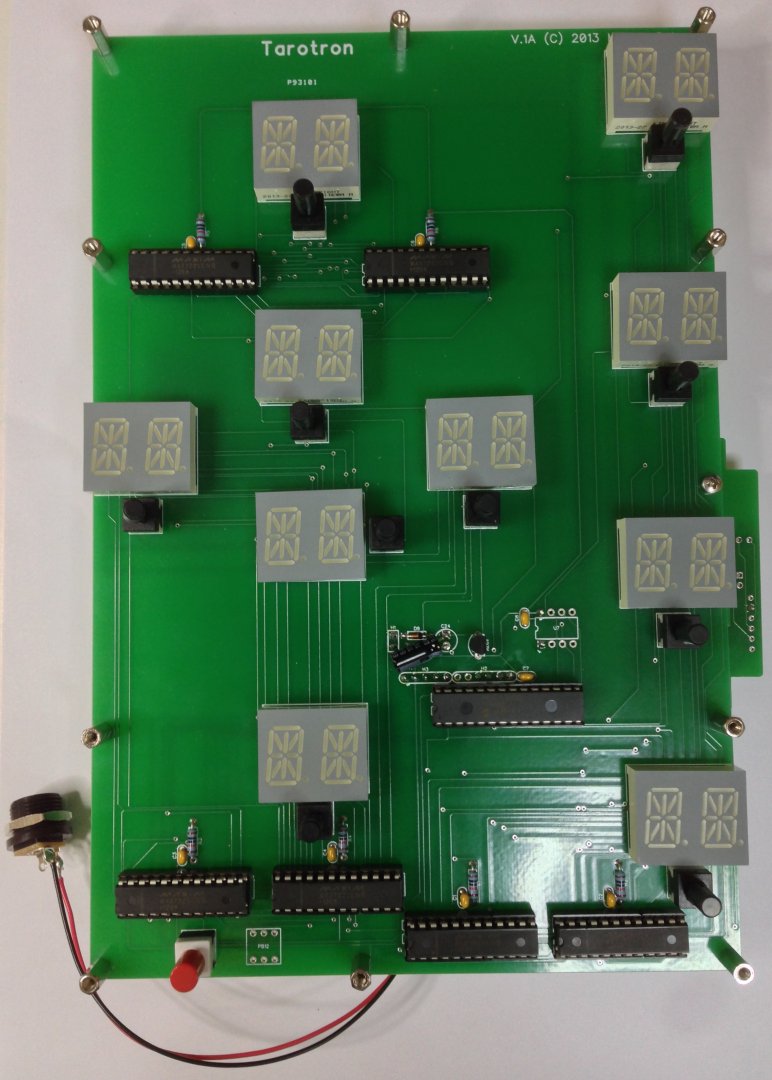