The Effeutron is a device I created specifically for the Wall Only Fest. It is an autonomous noise wall music generating machine. It has eight independent oscillators each with its own LFO and variable period gate, using four CD40106 chips. The oscillators themselves are gated in sequence by the CD4040 divider chip. A CD4049 chip provides a clock for the divider as well as a tube-sound fuzz effect. It runs through all 255 combinations of the oscillators, then stops.

It really doesn't have to run hands-off. There are 50 parameters that can be adjusted while it is playing. The amount of fuzz and the speed of the clock can be adjusted. Each of the oscillator blocks has six trimmer potentiometers to modify the sound. There are a lot of sonic possibilities here!

It was a fun project to build, but not being a noise musician, I probably won't use it again. If you are interested in owning the one-and-only Effeutron, feel free to contact me and make an offer.

Update: The Effeutron is sold. Congratulations to Nicholas in Australia. Have fun with it! 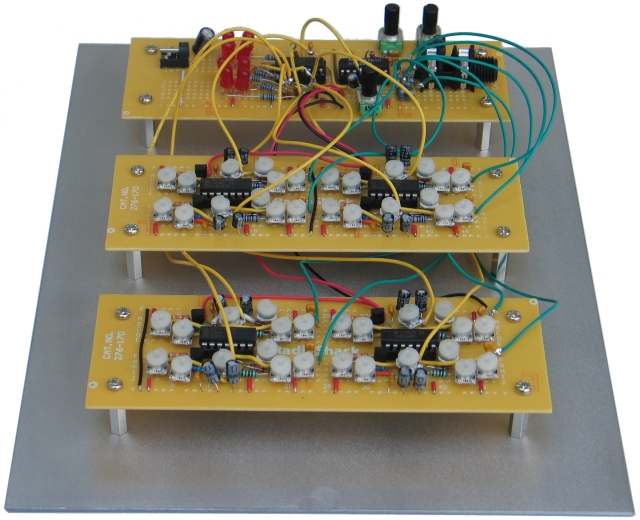 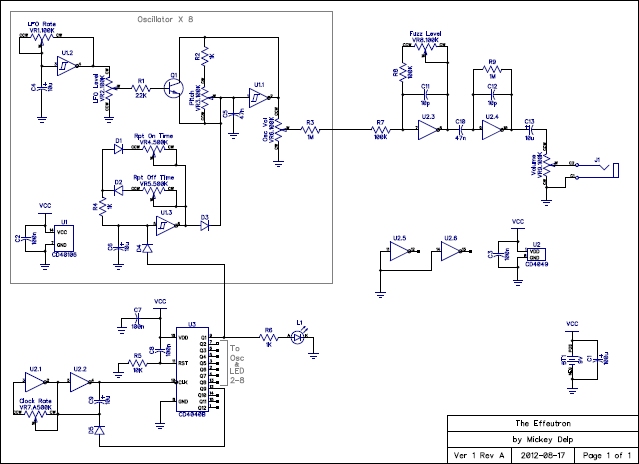 Below is my performance (as Dickey Melp) at the Wall Only Fest, September 4, 2012 at Trailer Space Records in Austin, TX. The rules of the show were: Don't touch gear after set has started, and do something awesome while the set is going on. Several non-noise musicians like myself were invited to play. This is what I came up with. OK, it's not very "wall," but it sure is noise!

The little device next to the Effeutron is a Wooster Audio Space Baby echo effect.