After I built the NeinOhNein hand clap pedal, I was inspired to create my own hand clap circuit – the Thunderclap. When I designed the LDB-1 Drum Machine, I included a simple hand clap. The sound is just filtered white noise, as in most analog drum machines. What makes the classic TR-808/909 hand clap sound so distinctive is the four part volume envelope. That is how they simulated multiple people clapping at not quite exactly the same moment. The Thunderclap faithfully reproduces the classic waveform, plus adds tweakability.

There is a lot of circuitry in the TR-808/909 to create that envelope, not to mention a lot of circuitry to create the white noise. In the Thunderclap, I used an 8-pin, 8-bit microcontroller to replace all that circuitry. The filter and VCA are the same as the TR-909, although I did use an LM13700 OTA in place of the obsolete BA662A. The resulting sound is extremely close. You can compare the similarities and differences between the Thunderclap schematic and the TR-909 hand clap schematic.

When I got the circuit sounding just right, I went back and replaced some of the fixed resistors with potentiometers so that the sound can be tweaked. The pots are volume, noise level, decay, and filter. Changing the level of the white noise before it goes into the filter gives the resultant sound a lot of variation, from soft brush sounds, all the way up to crazy clipping levels. The decay pot has a wide range so it is very useful. The biggest effect on the sound is the filter pot. The bandpass filter is a bridged-t configuration, so changing any one of the parts effects both the cutoff and resonance. With combinations of the controls, hundreds of non-hand-clap sounds are possible. You can get everything from clicks to finger snaps to snares to cymbals. If you turn all the knobs all the way up, you get an effect that sounds like getting hit in the face with a metal trash can lid!

The Thunderclap circuit board is designed to be easily mountable in a panel or an enclosure. Here is what it looks like without the pots and jacks: 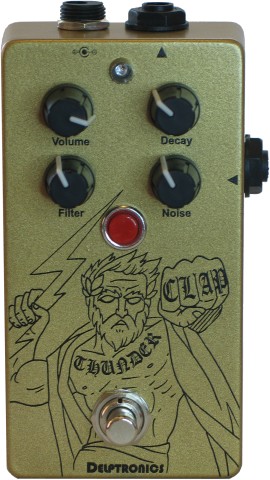 The stompbox graphics were designed by Ben DiPietro. The gold on black panel was a limited edition and is already sold out. I was a little surprised to sell any of them since the majority of Eurorack aficionados prefer “standard” silver panels to match the rest of their modules.

The Thunderclap is available as a kit or assembled in stompbox and Eurorack formats at http://delptronics.com.
You can also find videos and kit details there.